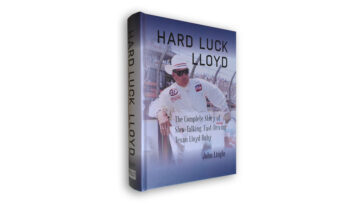 Love it or know someone who will?

He raced across four decades, capturing over 150 victories, all while staying true to his roots.

2015 Inductee into the Motorsports Hall of Fame of America!

Some remember him for his ever-present cowboy hat. Others remember him for his laidback nature and slow, measured speech, the direct opposite of his intense competitive nature behind the wheel of a race car. But most remember him as a man accursed with “hard luck” at the crown jewel of the USAC Championship Car race circuit: the Indianapolis 500.

From his humble but successful beginnings on the dirt tracks of Texas and Oklahoma, to his shining but all too brief run with Ken Miles as a factory driver for the Shelby American Ford GT40 program and his glory days as a USAC star, Lloyd Ruby’s career exhibited excellence across multiple forms of motor sport. Ruby raced and won in Indy cars, stock cars, sports cars, midgets, and motorcycles, only to have the hard luck of his attempts at the Indianapolis 500 cloud his page in American automobile racing history.

Packed with over 275 color and black and white photos, Hard Luck Lloyd tells the tale of “the Pride of Wichita Falls”, a man who raced across four decades, capturing over 150 recorded victories, all while staying true to his roots. Author John Lingle has gone to great lengths to cover all aspects of Ruby’s life; interviewing family members, friends, journalists, racing historians, and driver contemporaries such as Mario Andretti, Johnny Rutherford, Al and Bobby Unser and A. J. Foyt, all of whom helped to paint a complete portrait of Lloyd’s life.

“John Lingle’s masterful biography of one of the most beloved human beings ever to climb into a race car truly ‘captures’ the man, celebrating not only ‘Rube’s’ exceptional racing career – including his usually overlooked accomplishments in road racing – but also his remarkable spiritual nature which endeared him both to his fellow drivers and an adoring general public.” – Donald Davidson, Historian of the Indianapolis Motor Speedway

“Lloyd was one of the really good guys in our sport. He was full of fire but you would never know it, the way he was so laid back, and the way he talked slow and everything. When he was out of a race car it seemed like he was out of character, and you figured there was no way this guy was a driver, but when he was in a race car he was a ball of fire.” – Mario Andretti