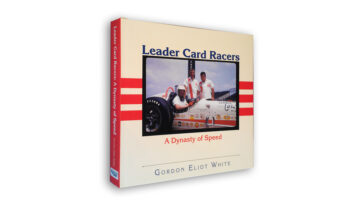 Love it or know someone who will?

The remarkable story of one family’s four-generation passion for auto racing.

Leader Card Racers is the remarkable story of one family’s four-generation passion for auto racing. Beginning with a team of midgets before WWII, successful paper manufacturer Bob Wilke, his son Ralph, and now his Grandsons have owned and sponsored winning racing cars on the championship trail, on dirt track, and currently with a successful return to midgets. With legendary mechanics A. J. Watson and Jud Phillips, the Wilke Family won the Indy 500 and the National Championship three times: twice with Roger Ward (1959 & 1962) and once with Bobby Unser (1968). Superbly chronicled by noted author Gordon White, the story of Leader Card Racers is a testament to the Wilke family’s devotion to motor sport and to the history of American oval track racing.