Despite a great personal interest in the 1911 races in Ostend and relentless effort researching these events, information was limited to a few American magazine sources that were not very helpful. However, history has a way of sneaking up on you when you least expect it

Through research for our new publication, Peugeot Racing in America, Sarah Morgan-Wu and I knew that Georges Boillot, Paolo Zuccarelli and Jules Goux competed at the Ostend races on September 3, 1911 in what were evidently two different types of Lion-Peugeot race cars. The question was: which types? After months of trying to answer that question, which was rewarded only with failure, I moved on. But our research continued.

In the process, we discovered photos of the Lion-Peugeot cars that appeared in Ostend, and this fateful discovery brought an opportunity to finally understand a small part of auto racing history.

The newly discovered photographic evidence indicates that Goux drove a voiturette race car, and photos of Boillot and Zuccarelli establish that they appeared in the Lion-Peugeot light cars. Further, auto racing historian John Humphries’ research brought additional understanding about the format of the races, and several other photos helped us piece together which other drivers and cars appeared in Ostend with the Peugeot factory team. 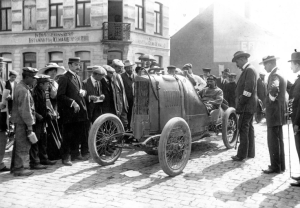 All of this effort and perseverance underlines the fact that cooperation between like-minded historians can indeed lead to new discoveries even after many years. Without research, history dies. With research, we can add new interest to an evolving sport.

Now, perhaps a similar effort might help us discover why Goux’s voiturette race car carried both numbers 34 and 36 in Dieppe, France at the Voiturette Grand Prix held in 1908. Surviving photos of the event present this mystery and we accept the challenge. History is only as good as the researchers writing it and we have to persevere, if for no other reason than to make sure something remains long after we’re gone.

Jim O’Keefe is a former high school history teacher and basketball coach who has been researching and writing about automobile history for over fifty years. He is the author of Racemaker publications: “The Winners Book & Database: A Comprehensive Listing of Motor Racing Events 1895-2015”, “Frank Lockhart: American Speed King”, and he co-authored the article “Born Winners: A complete history of the Miller 91s” (published in Cars & Parts) with Bill Digney.